The Bible speaks of three different kinds of leaders in every local church: elders, deacons, and members. Elders (also called pastors and overseers in Scripture – see Acts 20:28 and 1 Peter 5:1-2) are the head and heart of the church – men responsible before God for the church’s theological and spiritual vitality. Deacons are the hands and feet of the church – the practical leaders who oversee various functions of the church’s ministry. Members are missional Christians who love Jesus, are committed to their church, and serve according to their abilities so that more people can meet Jesus.

Our leadership team recognizes the authority of God, and realizes that we are shepherds who serve under the Chief Shepherd, Jesus Christ. We desire to devote ourselves to prayer and to the ministry of the Word. Our passion and goal is to equip the believers for the work of the ministry until we all attain maturity in the fullness of Christ.

Mark grew up on a small farm in Iowa in a family that did not attend church or even discuss religion. In fact you could say he graduated from the school of hard knocks. It was after meeting Tammy and starting a family that they moved to a small town in central Iowa where God placed them right beside a pastor who not only led them to the Lord, but is still one of Marks mentors. It was during this time that Mark began to feel the call towards ministry. He began by taking ministry classes at a satellite of Grace and found great joy in them. 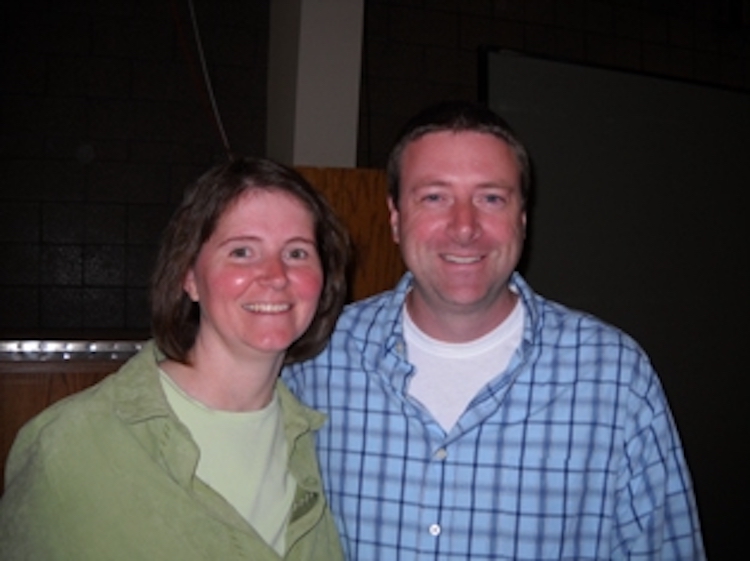 He soon took a stateside missions position with Child Evangelism Fellowship as a chapter director. Through this experience and training Mark enrolled with Moody Bible Institute where he continued his education. He later transferred to ATS seminary in Camilla Georgia  as they were transitioning from his current internship with First Family Church in Ankeny Iowa to his first full time position as "young lives pastor" in Mechanicsville Virginia.

Over the years Mark has served in Minnesota and North Dakota before landing in Nebraska where he served a small rural church for 8 years before coming to Saving Grace Bible Church. Tammy brings gifts of hospitality and faith to Saving Grace Bible Church as Mark serves as Pastor. They enjoy being with family, including their dogs, visiting the kids and doing things as a couple. Tammy crochets and has a craft business with their daughter Josie. She loves to read, cook and bake, in her words, “all things food”. Mark enjoys hiking, muscle cars, motorcycle riding, and do I dare say, Hawkeys?

Duane became an elder at SGBC in March 2015. Duane has always helped serve in many different ways in the church, but it wasn’t until 2014 that he had a desire to pursue the idea of eldership. 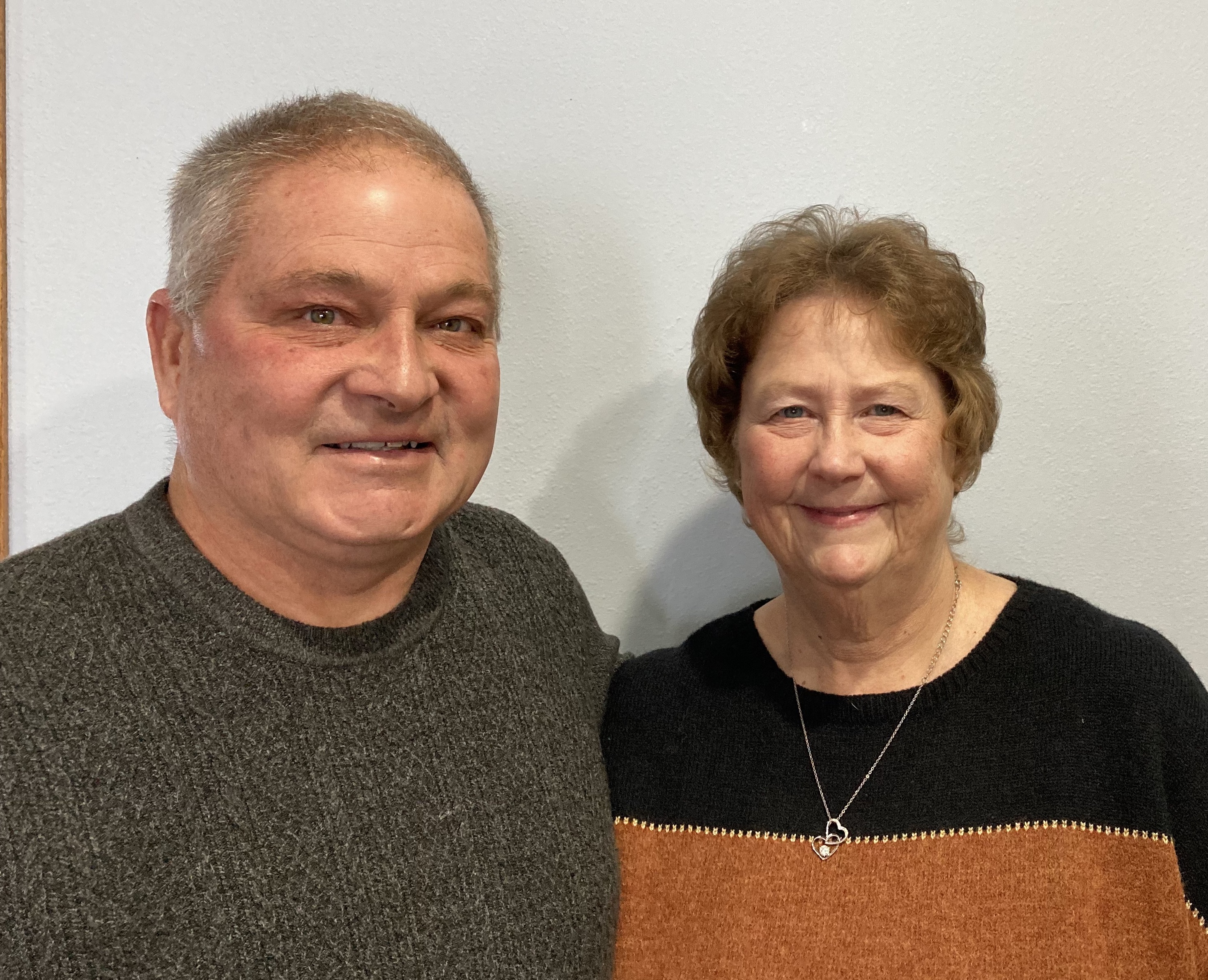 Duane grew up going to church his whole life. It wasn’t until 1980, while watching a Billy
Graham crusade on TV, that the gospel truly gripped his heart that day. It was then that Duane’s faith grew immensely and his desire to see God’s Word really fleshed out in his life. Duane has a deep desire for the church to stand on God’s Word and to never waver from it or compromise its wonderful truths.

Duane was a part of the very beginnings of SGBC. He again played a big role in serving whatever way possible, leading without being asked. He leads the Saving Grace Youth group (7th - 12th grades) and teaches 6th graders at Saving Grace Kids on Wednesday’s. He continues to grow in his knowledge of the Word and has enjoyed the Lord continuing to shape and mold him into shepherding this church. Duane cherishes the gospel and does a great job at reminding this to the people around him. Duane has been a huge blessing to this church.

Duane and Sharon got married in November of 1991 and have two children: Marcus and Kelsey.

Duane enjoys hunting and spending time on his farm.

Sam was raised in a Christian home and grew up going to church, but it was not until attending the University of Nebraska Lincoln that his faith really started to grow and thrive.  Throughout his college career he was involved in campus ministry called The Navigators.  He was a part of, and also led, men’s Bible studies and discipled others.  Sam met his wife Stephanie through their involvement in The Navigators.

After moving back to Belgrade in 2014, God strategically drew Sam and Stephanie to 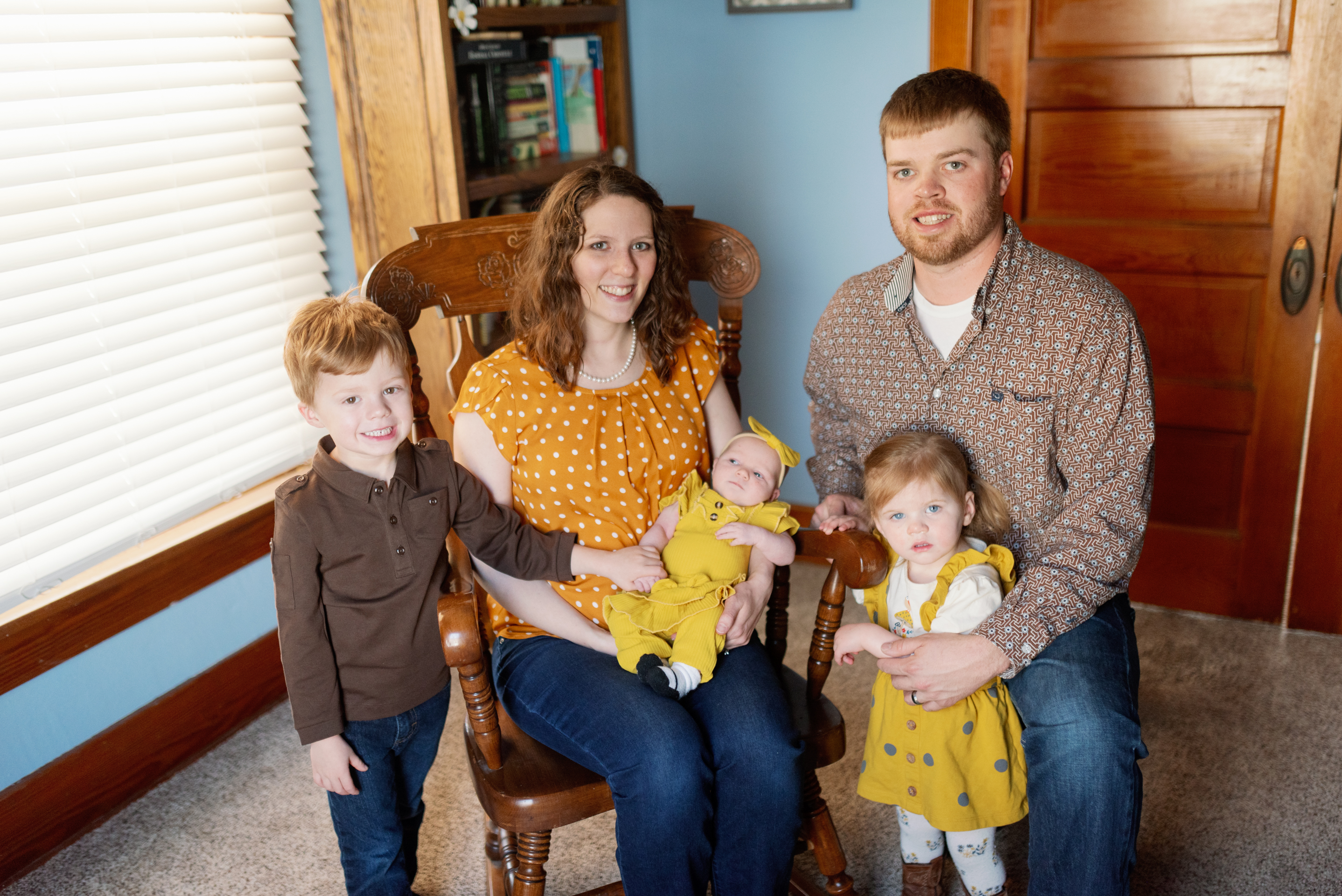 SGBC where they quickly became involved in the church and had a desire to grow with the church body.  Sam became an elder at SGBC in the spring of 2018.  At Saving Grace, Sam leads others by preaching sermons 1-2 times per year as well as leading men’s Bible studies and working with his fellow elders to strengthen and grow the church, and shepherd over the church body.

Sam and Stephanie were married in August 2012.  They live in Belgrade, NE with their son, Simon, and daughters Daisy and Lily.  Sam works on his family’s cattle ranch, and enjoys riding horses, dancing with Stephanie, taking Simon on ATV rides, and playing and watching sports. 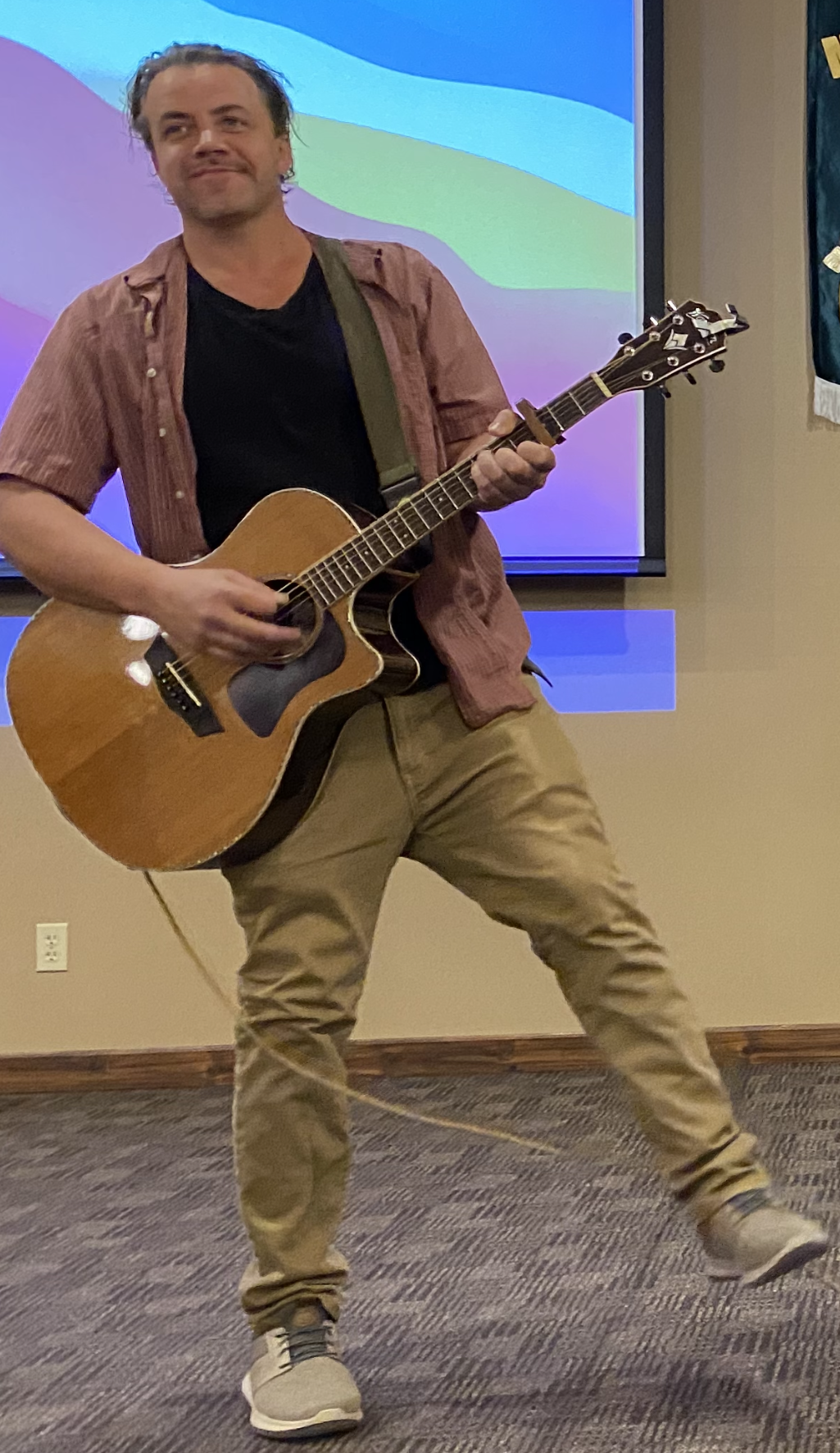 Chris lives on a farm outside of Belgrade.  He grew up around there and after moving and living in different places moved back in 2014 to learn to fly.

He has been coming to SGBC since November of 2019.  He is the Worship Director of the new Worship and Praise Group - Worship Stone.

He also hosts a Monday night life group in Belgrade.

Chris has a ton of interests, but enjoying and studying God's Word is at the top of the list.

Chris enjoys being a part of SGBC and looks forward to helping in anyway God sees fit.

Chris became Saving Grace's Deacon of Worship on May 1, 2022.

Art Howell lives in Albion, is married to Kalene, and has 3 married children and 9 grandchildren who all live around Omaha. 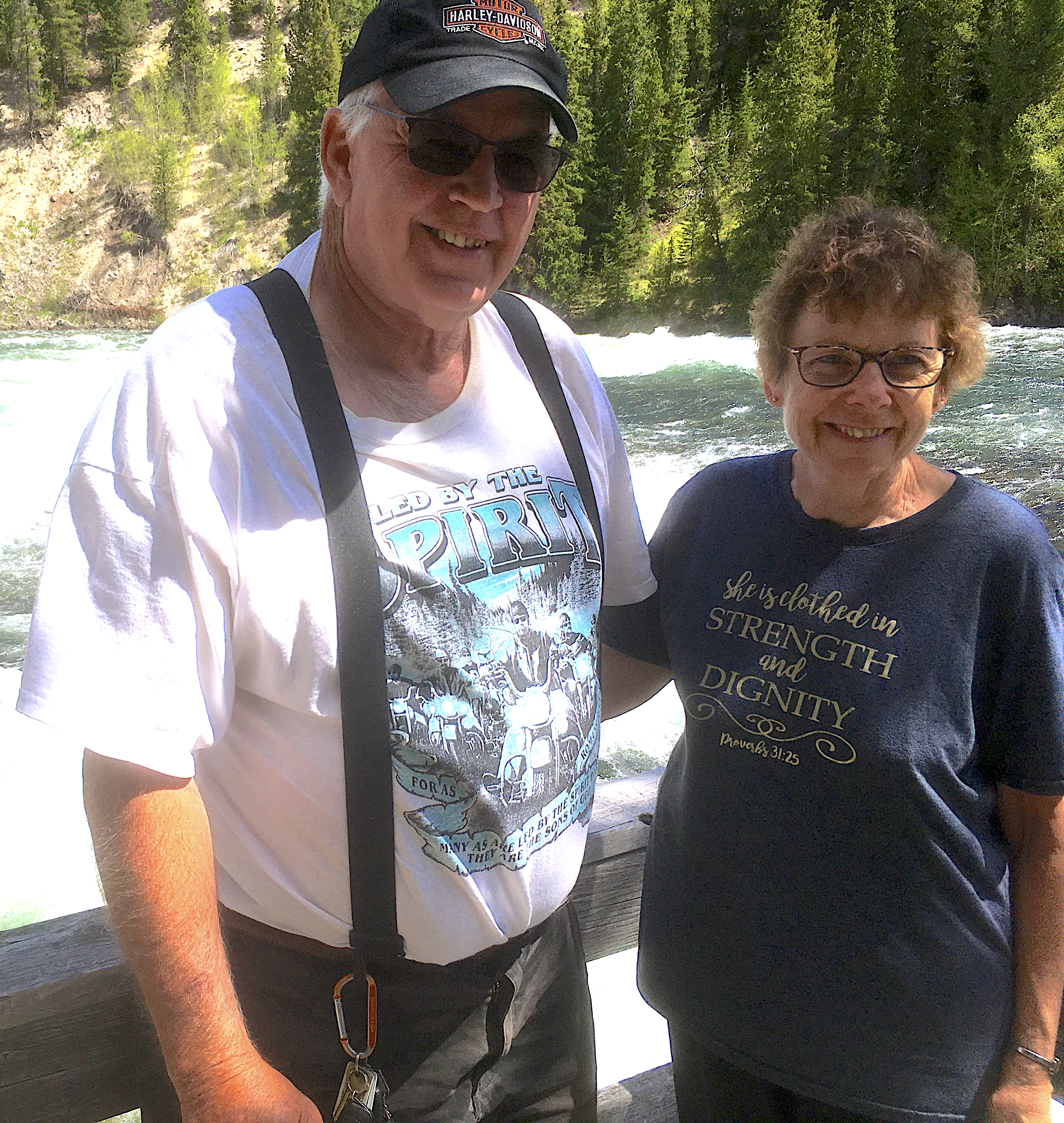 God was awakening his heart to realize his need of salvation. In January of 1993 Art accepted Jesus Christ as his Savior.  Art and Kalene started coming to Saving Grace in January of 2013.

He had an uncle who took care of the grounds of his church and Art thought this was great and desired to do this for his church. He became the deacon of grounds in May of 2022.

Art enjoys being a member of the Christian Motorcyclist Association and riding motorcycles.  Just over a year and a half ago, Art fixed some old drums that were in the church and started learning how to play drums and now is part of the worship team.